Pills All "I'm sitting in a room"

We can found another example of the dialogue between architecture and music in a physical experiment conducted by another composer of the 20th century: Alvin Lucier. Lucier was specialized in the study of the physical properties of sound and made sound installations that explore acoustic phenomena and auditory perception. In this experiment, the ingredients he used were: a microphone, an acoustic amplifier, two recorders and a room. The process of recording, entitled “I am sitting in a room” followed a series of steps briefly described here:

Repeating steps 3 and 4 until there was no mutation of the sound, Lucier came to reproduce the absolute frequency of the interpreter’s voice. Differently from the Philips pavilion designed by Xenakis, which was made in function and through the mathematical study of sounds, in this case, the architecture, the room, is used as a musical instrument: the acoustics of the environment allows the sound waves to bounce more and more repeatedly until the resonances prevail over the original sound of the voice. Lucier drew attention on a characteristic of the space in which we live (which is made up of resonant frequencies), and he did it through music. 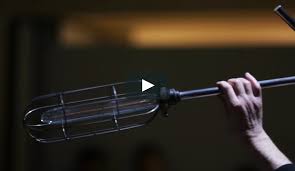